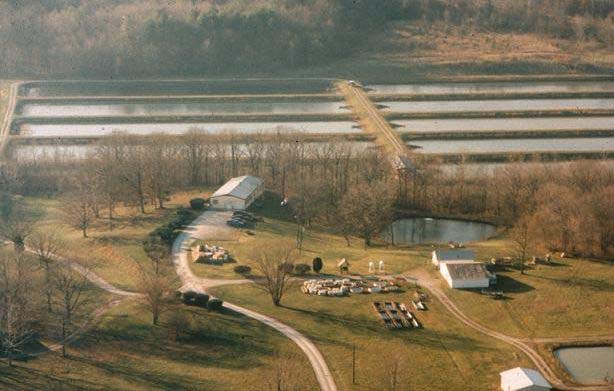 The research facility includes nine drainable 0.4 ha ponds constructed in 1963. In 1965, five 0.13 ha ponds were built and in 1980, an additional ten 0.04 ha ponds were added to the facility. The laboratory comprises about 2,700 square feet, including office space, two wet laboratories, and a combination library and conference room. Additional facilities include a 6 room residence, two storage and service buildings and an outdoor array of 800 gallon, experimental tanks.

The Sam Parr Biological Station  was constructed in 1963 as a joint venture of the Illinois Natural History Survey and the Illinois Department of Natural Resources. Originally designated the Marion County Fisheries Research Center, in 1966 the facility was renamed the Sam Parr Biological Station in recognition of the late Sam A. Parr’s many contributions to the sportsmen of Illinois.

Dr. Homer Buck was the first station director and remained in that capacity until his retirement in 1987 after 24 years of service. The first major research project at Sam Parr examined production variability among individual ponds. Results from this study, published in 1970, won the best scientific paper award in Transactions of the American Fisheries Society. In subsequent years, wide-spread interest in channel catfish farming led to studies concerning production and management of channel catfish in Illinois.

In 1972, a series of studies was initiated to compare life histories and productivity of largemouth and smallmouth bass, as single species and in association with bluegill, channel catfish and grass carp. Additional projects focused on effectiveness of grass carp as a biological control for aquatic vegetation, the reproduction of sport fishes in ponds enriched with swine manure, the role of Chinese carp in recycling of organic wastes, and production and management potential of hybrid crappie.